As was mentioned in my last post (check it out HERE), we purchased a flock after several years of not being able to. Seeing as it was late-autumn, our options were limited as to where we could actually get a new flock. So we did what anyone would do and we turned to the internet to find a reputable chicken-seller, be it a feed & pet store or ranch.

All of the feed stores in our area had no chicks available. This was completely understandable considering how late in the season it was. And they also had no adult chickens available, as it seems that the pandemic - at least in our area - has prompted people to start raising chickens. (Read an article about that HERE) I’m 100% all for this! Let’s give chickens good homes and good, long lives. Either way, if I wanted chickens I needed to go to a ranch.

Again, the internet was where I turned.

The closest ranch to me that was selling chickens wasn’t all that far - something like 20 miles or so. It came very highly rated online so that’s where we headed. When we got there we saw goats and sheep and alpaca and turkeys. And, of course, we saw chickens. A lot of chickens.

The man who helped us showed us the heated Chick House where there were more chicks than I could count. We didn’t want chicks as we didn’t want to have to deal with setting up a brooder or any of that. We have a full-on Coop and Run, but a brooder is another story. And with temperatures on the cold-side... chicks weren't what we were after.

The man then showed us runs filled with adult chickens. Again, we didn’t want to go with adults as we weren’t sure of ages and laying capacity and they all seemed established and happy. What we really wanted were pullets.

There were more than several young birds running here and there once we arrived. Supposedly they were all between two and four months old. A lot of them looked the same - a blur of whites and tans. But several stuck out to us. The breeds of each of the Girls is not really known. I think there was a lot of cross-breeding going on, as roosters and hens of different breeds were housed together. Either way, we came for four and left with five. And while these five have been briefly introduced in the previous post - with photos of each from when we got them - it seems only fair to give a better and more in-depth introduction to each of them here, with updated and more recent photos to boot!

One thing I will say before jumping in, while all of the chickens we bought seemed healthy at the time, when we got them home we found them to be underweight and full of lice and dealing with respiratory conditions. The weight issues and lice were fixable with some good food and a good delousing. The respiratory condition on the other hand was a bit more of a issue. But after an expensive visit to a reputable avian veterinarian and two weeks worth of medication, things were looking up!

Having said that, a call to the ranch to explain this all was met with less than concern. The guy who runs things - not the man I dealt with - said his chickens are vaccinated and healthy. And that he considers it all more of a hobby than a business. Yet somehow he’s on Yelp. Either way, we came home with our five Girls and they are - in my opinion - infinitely better for it.

Anyway. Enough of that. We’re here to celebrate our Flock. So, without further adieu...

Ruby is supposedly a Bantam Rhode Island Red. This is suspect to me because her legs are not the yellow color that Rhode Island Reds usually have. They're more of a white or dusky white. But who knows. As mentioned, there were several different breeds, both male and female housed together so it’s more than possible she’s some sort of combination. So, Bantam Rhode Island red and... something. 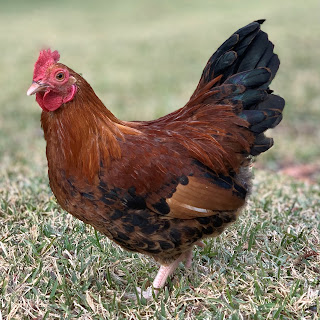 Either way, Ruby is energetic and vocal and personable (chickenable?) and inquisitive and fast! She may be the smallest of the Flock, but that doesn’t stop her from holding her ground and letting the other Girls know that she won’t be pushed around. She likes to wedge herself under the others while they’re sunbathing.  And she likes to sit on our shoulders. Ruby is as Ruby does! And it’s pretty great!

ALSO! The older Ruby gets and the more she fills out, the more we're thinking... Ruby may be Rudy? No crowing yet, but her feathers certainly seem to be more cockerel than pullet. We'll see. Updates on the Ruby/Rudy Front to come!

When we first got Molly unbeknownst to us she was severely underweight - the most underweight of the group -  and infested with chicken lice. Not a great combination at all. It’s from Molly’s condition that we realized the ranch where we got the Girls should not have been rated as highly as it was. But after a good delousing of the entire Flock and treatment of the Coop and Run, and a good mixture of starter mash and grow crumble as food, Molly and the other girls started to put on some weight and are now where they should be weight-wise. Anyway... back to Molly. 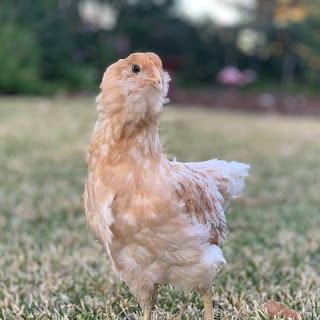 We have absolutely no idea what breed Molly is. At first we had no idea because of her
condition. But as she started to become healthier we began to think maybe she was Araucana or Ameraucana, as she started to have the telltale cheeks. After several searches online, we are settling into full-fledged Easter Egger (more on Easter Eggers HERE, and more on the difference between Araucanas, Ameraucanas, and Easter Eggers HERE) We’ll know more once she starts laying and we get to see the color of her eggs.

The best way to describe Molly is “Lap Chicken”. When you visit the Run she’s the first one to hop into your lap and cuddle up and make herself comfy. She coos and hums. And she is definitely the sweetest of the Flock.

We have zero idea what breed or breeds Fern can be. And when the guy who owned the ranch told us on the phone that she was a "black feathered chicken" I threw up my arms in resignation and decided we were on our own. Probably for the best, honestly. 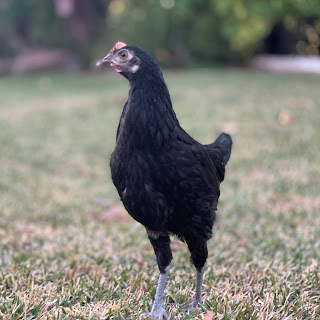 Fern has gorgeous black feathers that when hit by sunlight have that iridescent green-blue sheen like a beetle's wings. She has a pale comb and wattle - for now, anyway. She has long slate-colored shanks. And she has blue-ish ears. Again, no idea what we’re dealing with here. But since when does that matter?! She’s awesome nonetheless!Fern is curious and alert. And she's been Molly's partner in crime since day one. She's always right behind her to greet us at the Run door when we approach. And she loves to hop up onto laps and gives Molly a run for the cuddle bug of the lot. Plus, she’ll fall asleep in your arms if you give her the chance. Sweet, sweet Fern. 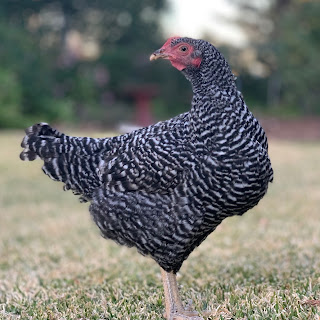 Either way, she has been sturdy and solid and sweet as can be since day one. Even so, she’s not afraid to let the other Girls know when they’re bugging her with a quick spreading of her wings and a quick lunge forward and a quick squawk of sorts. Having said that, she does a lot of cuddling with the others, too. A lot of it! Specifically with Molly and Fern.

Daisy is curious and observant. She’s active and fun. She loves to be as high up on the roosts as possible and when she shakes it all out after a dirt bath it's a joy to see. Plus, she’s gorgeous. She was fairly small when we brought her home, but today Daisy is one of the largest of our Flock, second only to Kit.

Kit is an enigma. Unlike the others, when we got her she was much larger and looked much older than the rest. We’re guessing she was about eighteen or twenty weeks old when we bought her. And we're not sure exactly why a chicken that old or that large was in with others that were so small and young. Maybe she was being bullied by larger chickens in the next pen over? Not sure. 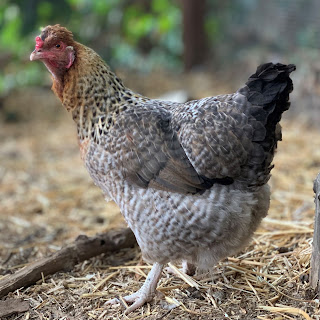 We were told by the guy who owns the ranch that she’s an Ameraucana at least in part, but honestly she doesn’t really have that many Ameraucana traits that we can see. Maybe some coloring, but that's it. Also, she has a crest on her head that speaks more to the Cream Legbar breed. Plus her reddish-orange eyes speak to that, too, at least from what I’ve read. (Read more about the Cream Legbar breed HERE.)

One other big thing is that she’s the first to have started laying eggs! And they are a gorgeous BLUE. We are so happy about this! As for her demeanor, she started out as incredibly shy. When we’d come into the Run, she’d head into the Coop. If we were in the Coop, she'd head to the Run. Eventually she started not run away, but just hide out in the Run's corners. But now she’s warmed up to us and, while petting her really isn't an option yet - although she's put up with it once or twice - she is fairly comfortable with us around. I call that a win!

Well. Those are our Girls!

Five wonderful additions to our family. They are all warm and personable. They’re all curious (even Kit, when she doesn't know we can see her!). They’re all loving. And I am so thankful that we were able to take them from where they were just one-of-many to a place where they are now each individuals. Each cared for, one-on-one.

We are lucky to have these Girls. And I like to think that they feel the same.

Posted by ChickenDup at 7:29 PM