A Rooster By Any Other Name...

As mentioned in my last posting (check that out HERE) Ruby’s feathers were pointing more toward cockerel than pullet. And things have finally become official. 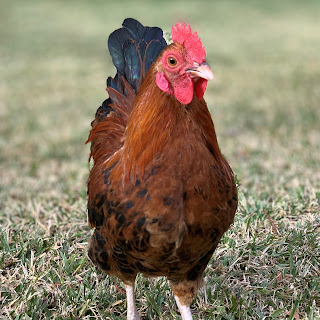 The chicken we’ve been calling Ruby will now be called Rudy, and we’re extremely excited by it. I’m not sure if our neighbors are, but us? Definitely.

When we first brought our Flock home, they were all underweight and infested with chicken lice. (More on this a few Posts back, so check that out HERE.) Obviously we didn’t know this. And I doubt the place where we got them from knew it either, as it wasn’t as reputable as all of its online reviews said.

Here’s a quick Before-and-After comparison of Rudy from when we first brought him home and now. 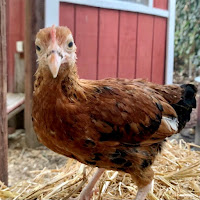 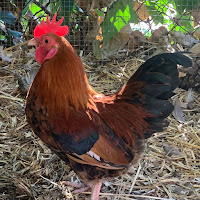 Yep. That's the same chicken. It's amazing what can happen after some proper care and a good molt.

Hackle Feathers are the group of feathers found on the neck of a chicken. When it comes to hens, the hackle feathers are usually a little bit wider and maybe even a bit rounded. And with roosters these feathers are generally long and thin and pointy-looking, kind of like hair.

As for Saddle Feathers, this is the group of feathers that look like, well... a saddle. They sit on the back and are right in front of where the tail starts. Hen and Roosters both have saddle feathers, but a rooster's saddles are generally longer and come to a point.

This brings us to Sickle Feathers. These are only found on roosters. And they are the tail feathers that are long and curved like... wait for it.... like a sickle.

You can read more about Hackle, Saddle, and Sickle feathers HERE. And a lot more about chicken feathers in general HERE and also HERE!

Anyway, Once these three groups of feathers started to become pronounced, it was just a matter of time before the crowing started. And start it did!

So, we now have a rooster in our midst. And while we may not be the most popular family in the neighborhood because of it, I think it’s pretty cool.

Posted by ChickenDup at 1:28 PM 1 comments