So, a few weeks ago I was perusing all the chicken-related people I’m following on Twitter and there was a tweet that caught my attention. I wish I could find the original tweet to give credit where credit is due, but I can’t. Sorry. Anyway, the tweet was about easy protein sources for the flock during winter months. And it was touting exactly how easy certain protein sources are to come by, or even grow in your own kitchen. There was a link attached that took me to a site about sprouting mung beans. Mung beans? Yes. Mung beans. And you know them. You've probably even eaten them. The bean sprouts used in Chinese restaurants are mung sprouts.

So, me, being ever-curious when it comes to my Girls’ nutrition and treat consumption, decided to do some research. Apparently there are something like 13,000 types of beans and legumes out there. Seriously. 13,000. Somebody counted. That must be where the term ‘bean counter’ comes from.


Anyway, where do mung beans fall on the list of 13,000 with regards to protein content? Right there at #31 with 7% of the bean being protein (14.2 grams per cup). Not bad considering that’s about the same as the amount of protein in a turkey burger patty.

But where do they rank on ease of sprouting?

According to several websites with unchecked credibility, mung beans are one of the easiest – if not the easiest – beans to sprout.

Well, that just knocked it from #31 to the top of the charts for me.
So. I figured I’d try my hand at a little germination. I did more research and soon I knew everything I needed to know:

But for those of you who want more, here’s everything in detail.

First, I went to Whole Foods (and when I say ‘I’, I mean my wife) and bought a scoop or two of dried mung beans from their bulk section. Then, I gathered my sprouting supplies.
The beans. A bowl. A peanut butter jar. A small strainer. A 1/4 cup measuring cup. That's it.
﻿
Then I drilled a few holes in the jar lid. Why the holes? Well, as the beans start sprouting, they conduct heat. This heat needs to be released. And a sealed jar just won’t work. Things get too hot. So, the holes in the lid vent the heat and help the sprouting process.


After that, I measured out the dry beans. Any amount could be used, I guess, but I used 1/4 cup, just to keep it manageable. I rinsed the dry beans in the strainer and put them in the empty jar. Then, I added cool (not cold) water. Three times as much as the amount of beans. I used 1/4 cup beans, so I used 3/4 of a cup of water. I like easy math.


The beans need to soak for 8-12 hours (it kickstarts the germination process) and they need to be put in a place that's not-too-bright-not-too-dark. I took that to mean my counter beside the toaster oven. After all of that hard work, I went to bed. The next morning I woke up to find the beans had doubled in size, more or less.

I drained all the green water out (just poured it through the lid) and filled the jar with cool (not cold) water and drained again. Just to rinse any mung off of the beans. (HA!) Then back to its place beside the toaster oven for another 10-12 hours. Then another rinse. Another drain. Another 10-12 hours. After four days, those little dried beans turned into...

It was pretty cool to see just how fast it all happened. And they taste exactly as you'd expect. Healthy. Take that as you will.

Now I know what all my one follower is thinking: Good source of protein or not, did the chickens go crazy for them?

Well. 'Crazy' is a strong word. But they ate everything. Eventually. And in doing so, I avoided having to grill them turkey burgers.

I search the web for all things chicken related. Articles on coops. Articles on hens. Articles on roosters. Articles on chickes. Message boards discussing this breed or that breed. What's the best bedding? The best grit? The best way to introduce new members to an established flock. Things like that. I love it all. Unapologetically. And in all my reading, one subject keeps cropping up. And that one thing is 'Grass' (the legal variety, of course).

A lot of the articles were devoted to keeping chickens from destroying the stuff. 'How do I stop my chickens from tearing apart my lawn?', 'What can I do to keep my chickens from ruining my yard?' 'I've just planted fresh grass and flock has completely annihilated it' Things of that nature.

And then there were articles devoted to how good grass is for chickens. One said, not only can chickens eat lawn grass, but they should eat it. Considering greens is a normal part of a healthy diet, and grass is essentially green (except for my neighbor's), it fits the bill. It's chock full of vitamins and a great source of roughage. Plus bugs love to run around in it. And chickens love bugs. (Another article I read).

So, all of this grass-talk got me thinking. If people are having trouble maintaining their lawns because chickens eat so much of their grass and it's actually good for chickens to eat the grass, then why not serve it up buffet-style.

And that's exactly what I did.

I went to Home Depot (as I tend to do this several times a week, I'm finding) and I picked up one piece of fresh sod. Five square feet of grass blanket, all conveniently folded soil-side-out for easy, albeit it dirty, transportation. All for about $2.50. How do they stay in business at these prices?!

Anyway, when I got home, I put the sod in the Run, unfolded it, brushed my fingers through it a couple times to give it that messy-look to make it seem more appetizing, and...

Well. Let's just say the flock went to it like... chickens to grass. They loved it. LOVED IT! And they will continue loving it until it's either pecked away or dried out, which ever comes first.

Posted by ChickenDup at 9:26 AM 0 comments

A Coop by any other name...

A Chicken Coop has two doors. If it had four doors it would be a Chicken Sedan.

Yes. I went there.

Anyway, speaking of chicken coops, it's almost time. Time for the girls to leave the Pen, that is. What's the Pen, you ask? The Pen is exactly what it sounds like: a pen. But not some run-of-the-mill pen. Not for my Girls. Their Pen is a nice little comfy number set-up in a corner of my garage. Soft woodshavings, a couple roosts, nice little light, treats thrown in whenever possible. But they can't stay in the Pen forever. No. Relocation is inevitable, I guess. And that relocation is to... 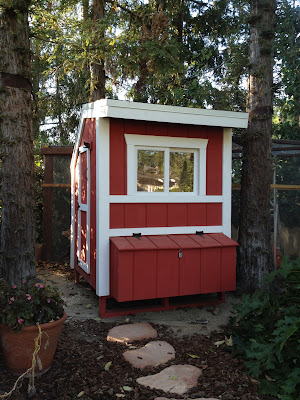 That's the name of my Coop/Run combo. The name is official. The only thing missing is a plaque announcing Name and Est'd date. (It's on it's way!) Yessirree! 5'x4', working windows, ventilated eaves, roosts, three, count 'em... three nesting boxes, and a chicken door that leads to an enclosed 130 square foot Run.

Now, the hens have been enjoying their afternoons perusing what will eventually be their home for some time. Scratching through the dirt, taking dustbaths, pretty much whatever they want to do until dusk hits. That's when they're taken back to the Pen.

And this is all very exciting. But the excitement doesn't come without a few worries and racked nerves.

For example: When I finally say, here you go, Girls. Coopenhagen is your new home. 24/7. No more cozy Pen in the comfort of the garage, I'm going to worry. I mean, how cold, really, does my garage get at night? Not as cold as the Coop, I'm guessing. Not this time of year.

Well, that's my big concern. The night-time temperature. It is January, after all.

Yes, my Chickens are three months old. Yes, they are fully feathered (I think). Yes, the Coop is fully enclosed with roosts and nesting boxes and places for the Girls to snuggle close for maximum body heat.

Granted it's not as cold as some places. Where I live the night time temperatures dip into the low-40s. Yes, I hear the laughing from those of you Back East. Low-40s is nothing compared to the temps where water needs to be thawed three times a day, but still. I'm new at this and it's hard to pull the trigger. I've pampered my Girls. And I worry about them becoming Chicken-sicles. I'll be a nervous wreck the first night. I know. So maybe I won't move them out this week.

Maybe next week. Or the week after. Either way, Coopenhagen is ready even if I'm not.

Posted by ChickenDup at 7:22 PM 0 comments